The signature scent of Alley Cat Beard Co!  When have we not caused a little ruckus, right?  We took a sweet yet bold strawberry jam and kicked its face with dark oud to create a devilish little gem.  Slap some on your face and you will be ready to cause a ruckus like no other!

Directions: Always apply to a slightly damp beard for best absorption and results. Apply desired amount based on beard length too your palms.  Rub together then apply directly to beard.  Make sure to reach deep enough to massage oil into skin. Comb or brush through.  If applying beard butter or balm, wait 10-15 minutes before applying. Style and now you’re golden!

I only found Alley Cat Beard Co. in the last few months, and I have been missing out! G Lew has created one of the most exotic and fantastic carrier blends in the industry. If you have been buying beard products for a while, you start to see some common carrier blends from company to company. Alley Cat’s carrier blend contains none of the usual suspects. Instead, it includes a list of unique oils that work amazingly for my beard. I’d categorize it as a medium viscosity oil that absorbs quickly and leaves my skin and hair feeling healthy and soft. I may be late to the Alley Cat party, but brother I am all in now.

Scents are so subjective, and I don't think beard product reviews should be based solely on scent profile. In-beard feel, and performance should be the main element reviewed IMO. One man's 5-star scent is another man's 0-star scent. I am fortunate in that I have a broad spectrum of scents that appeal to me. There are scents that I LOVE, scents that I like a lot, scents that I think are decent, and very rarely I find a scent that doesn't work for me on any level. With this is mind, I really like Ruckus. Pairing it with oud just works and is unlike any other scent I’ve tried.

Alley Cat’s customer service is top notch, and I love supporting a small, veteran owned business. Amazing product from a great company make this a must-buy for any bearded brother.

First time Alley Cat buyer and I'm hooked. I got three different scents and they are all great, but more than anything I'm most happy with the feel of my beard. Great quality product, beyond satisfied with results.

Tipped it over and it all spilled out, smells great though!

B
Big Stew
It's a staple for a reason

The strawberry smells like real strawberries and the oud really brings it all together! This is a favorite for a lot of us, and for good reason! The Alley Cat carrier blend is really something special!

My first was Fizz-182 then recently purchased Ruckus and wow. These both were recommended by Dan C bearded. The Ruckus is a great scent. I also have the unscented and fizz-182 buttah. Love Alley Cat.

Explorer’s Log Day 1:
I have entered the Alley in search of the cure for a true scourge in our society. Yes, I mean itchy skin and beardruff. Legends have been told of an animal in this Alley that would provide a magical elixir to cure these ails. I do not intend to leave the alley until I find it.

Day 3:
Taking my time to overcome the terrain of dumpsters and line cooks taking a smoke break, I came upon the first animal. It was an Alley Hippo and it was no help. It merely chewed 3-day old spinach in silence, so I pressed on.

Day 7:
We will not speak of the Alley Sloth. The horrors. I will never look at a jar of pickles the same way again.

Day 12:
When all hope seemed lost, I finally found it. Tucked just behind laundromat, between the artisan bologna shop and the $3 store, I found the Alley Cat sitting on an 80s style boombox. He said his name was Ruckus and said if I could dance like the one guy from the Mighty Mighty Bosstones, he would give me what I seek. So I hopped and swung my arms to the ska music in my head and was rewarded with a bottle of oil bearing Ruckus’ name. The scent was intoxicating and the oil soothed my now-long beard. I thanked him and ran from the alley, bursting into the sunlight with the softest, most nourished beard in the land. The news media were there waiting for me. A reporter thrust a microphone at me and asked me how good the Ruckus oil is. I stared into the camera and replied, “BERRY.”

Tl;dr - this oil is PHENOMENAL. It smells like fresh-picked strawberries and it’s not too sweet and is nice and complex on the dry down. Most importantly it feels amazing in my beard. You absolutely must try this!

I love this one. Definitely considering getting the cbd version as well. One of my favorites. Not to strong but can still smell it throughout the day. 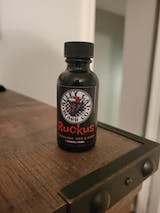 This scent is absolutely bomb. Smells like real strawberry jam but not overwhelming. Amazing feel in beard as well and can get away from it